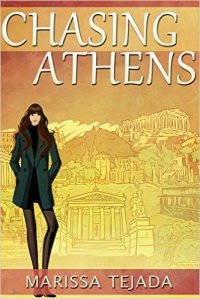 Suddenly dumped, a heartbroken American expat stays on in Greece, confronting culture shock, crisis, and the charm of Mediterranean men as she redefines the true meaning of home.
When Ava Martin’s new husband unexpectedly ditches her months after they’ve relocated across the world to Greece, the heartbroken American ex-pat isn’t sure where home is anymore. On the verge of flying back to the States with her tail between her legs, she makes an abrupt decision to follow her gut instead and stay on in Greece. She soon discovers that the tumultuous, culture-rich Mediterranean country is coloring her life in a way no place else can, changing her forever. But is it where she belongs?

Ava’s newfound independence throws her into the thick of Athenian reality, where she has brushes with violent police riots and gets a taste of both the alluring islands and the city nightlife. Despite pressure from her mother, uncertainty over her impending divorce, and unresolved issues with her long-estranged father weighing on her, she’s determined to make it on her own. With the help of two very colorful Greek friends, she laughs and learns while facing culture shock, language barriers and the charm of Mediterranean men, until a life-threatening medical emergency back home in sleepy Ithaca, N.Y., forces her to decide where she truly belongs – and what truly matters.

One response to “Featured Book: Chasing Athens by Marissa Tejada”